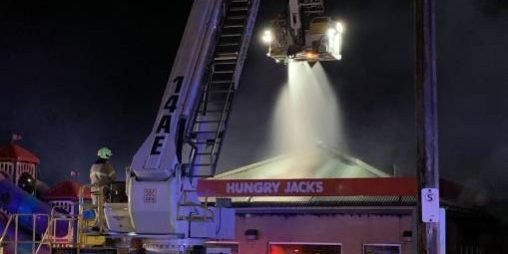 An inoperable kitchen extraction system can close a restaurant in seconds and result in costly fire brigade call-outs.

Seven fire trucks responded to a structure fire at a Traralgon restaurant on 24th June after the kitchen caught fire.

Emergency services were called to Hungry Jack’s, located in Argyle Street, at about 7pm according to the Latrobe Valley Express.

The fire spread to the roof of the premises and was brought under control just after 7:40pm.

About 20 people were safely evacuated from the restaurant, however, ambulance services on scene treated one man for smoke inhalation. The man was transported to Latrobe Regional Hospital in a stable condition.

The Country Fire Authority believe the fire was caused by a deep-fryer.

Whether the ductwork is clean or laden with fats, oils and grease, it can often make the difference between a small kitchen fire being brought under control quickly, or it raging unchecked through other parts of the building such as the roof (in this case).

The smallest amount of grease and fat could have been the instigator of this fire in the restaurant’s kitchen. This, in turn, could have lead to the fire spreading through the kitchen extraction system and into the roof.

In Australia, kitchens are reported as the number one source of fires in buildings. Unattended cooking is the number one source of fires in kitchens, and these typically occur directly below the kitchen exhaust hood. Kitchen canopy cleaning helps operators meet regulatory responsibilities, including fire safety. Keeping kitchen exhaust systems free from grease build-up is a messy and ongoing task, which can be rectified with the use of the Shepherd Filters solution. Made from 100% bio-degradable and fire-retardant wool, Shepherd Filters stop up to 98% of grease from entering the kitchen extractor system. This not only reduces the frequency of costly kitchen canopy cleaning, but gives restaurant owners added peace-of-mind that they are protecting their hood from grease build-up between cleans too!