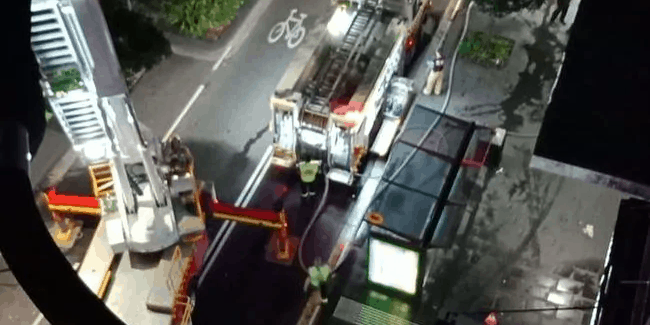 If a fire reaches the roof of a commercial kitchen, it is highly likely that grease build-up within the kitchen ventilation system would be involved.

20 firefighters raced to the scene of a popular sushi restaurant in Surry Hills on Saturday night after a fire broke out in the kitchen.

Emergency services were called to Ichibang on Crown Street just before 10pm after a triple-0 caller reported seeing flames and smoke pouring out of the building.

Pictures from the scene show firefighters using cranes to tackle the blaze from above, according to News.com.au

The woman was unable to explain how the kitchen fire started.

Grease vapor accumulation is one of the most serious hazards to a commercial cooking area.

Proper management of this hazard, a very achievable task, would greatly reduce the risk of more serious fires.

The higher the cooking surface temperature becomes, the more grease is transformed into a vapor state.

As this vapor cools, it condenses or returns to a solid state (although chemically altered).

So, instead of exhausting the grease hazard, the exhaust system actually becomes a fire hazard.

The Shepherd Filters team knows that the fire risk associated with grease build-up in the kitchen ventilation system is considerable.

We also know that when a suitable grease control solution is implemented, that the risk can be significantly reduced.

Contact us today to learn more about how to stop up to 98% of grease vapours from building up inside your commercial kitchen ventilation system today!