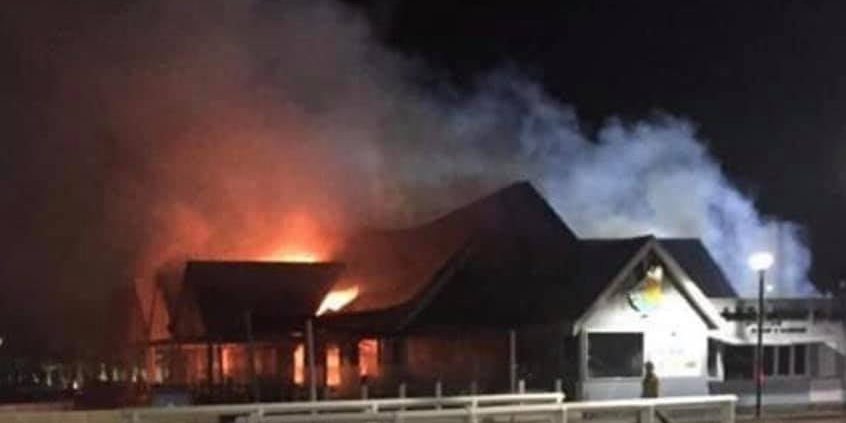 An iconic South West restaurant and bar on the Busselton foreshore has been destroyed in a fire early on the morning of 12 April 2021.

The Goose Beach Bar and Kitchen, next to the Busselton Jetty, is barely recognisable after the fire, which has razed the roof, leaving huge scorch marks over its trademark blue cladding.

The fire started at 3.46am in the restaurant’s utilities room before spreading to the entire building according to Perth Now.

Local residents packed out the area this morning to get a view of the damaged building, with a number posting images of the tourism gem to social media. 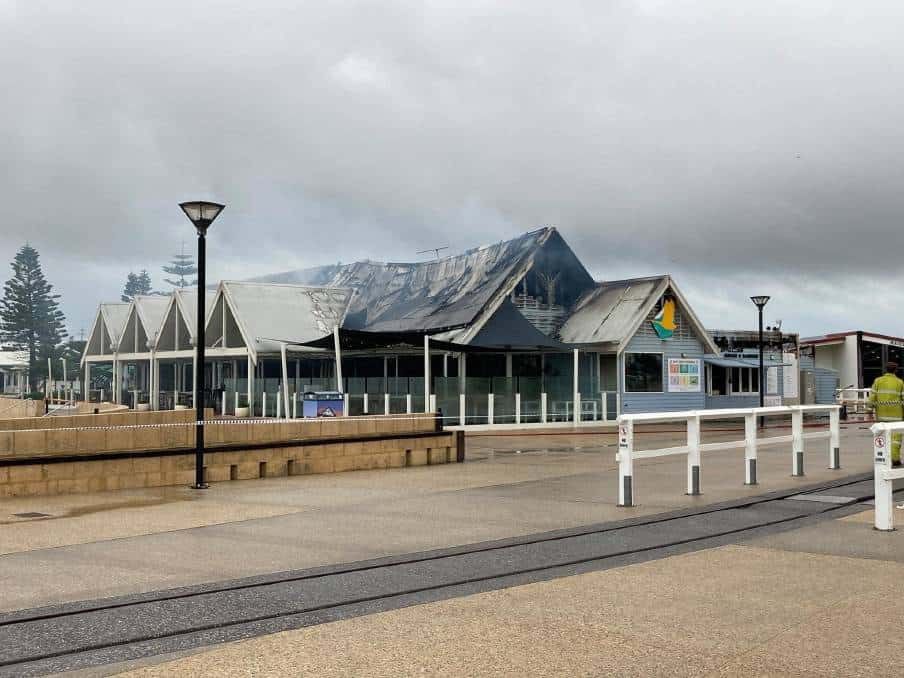 Busselton Jetty chief executive Lisa Shreeve told Triple M radio the fire, which started about 3am, will leave the restaurant closed for at least a year.

DFES incident control officer Neil Mckay said the fire was a “total loss” for the community and could even result in the building being demolished.

“We received a call to say there was a fire at the site and on arrival we found the western side of the building, the utilities area, alight and we set out to put it out,” he said.

“Unfortunately it had already got into the roof space & resulted in basically a total loss of the building.”

Owner Qi Eng said the blaze was “devastating for everyone” and she was already looking at how to rebuild. “The Goose has been a family for us and has provided a living for so many staff in the past, we are devastated. 100% we will rebuild it, we will bring it back as soon as we can. We will start to evaluate the loss and see what it takes to construct the building in the very near future,” she said.

It is reported 35 firefighters worked to put the fire out. Mopping up started at 7:00 am but crews had to evacuate after the roof collapsed more than an hour later.

The Goose is one of the largest employers in Busselton with more than 70 workers and manager Tim Meikle said they would potentially work with other hospitality businesses in the region to employ the restaurant’s staff.

“We have a huge responsibility to our employees,” he said.

“Everyone who works there including the owners is proud of the building and we are very upset to see it in its current state. “Once we get a handle on the situation we look forward to working with the community and our staff in getting this iconic building back for locals and visitors” Mr Meikle said.

The news is a devastating blow to the area, which is in the middle of one of its busiest school holiday periods of the year.

With the end of JobKeeper and JobSeeker last month, the blaze couldn’t come at a worse time with business bar tender Siobhan Longmore “shocked” and “heartbroken” to see the damage.

“This place is iconic. So many people come here,” she said.

“I am sad for all the workers, for all the people who have worked here since it opened like the chef, the hours they have put in to the business.”

City of Busselton mayor Grant Henley said the restaurant was one of the “three pillars” the Busselton foreshore revamp was centred around and would be sorely missed.

“It is fondly remembered by people who have had breakfast, lunch, dinner, weddings and functions and it will be sadly missed in the time it takes to repair or rebuild,” he said.

Vasse MLA Libby Mettam said it was sad to see the damage on one of the regions “most iconic businesses”.

The news will be a devastating blow to the area, which is in the middle of one of its busiest school holiday periods of the year.

The restaurant’s management vowed to rebuild in a message to customers this morning.

“We just want to say a big thank you for all the supportive and encouraging words this morning! We will put everything in to bring back an even better Goose in the near future!” they wrote on Instagram.

The Busselton Jetty will be open when the smoke has cleared.

When Fires Spread to the Roof…

The cause of the fire is still being investigated, with the source appearing to have come from the plant room before spreading to the roof.

Fires can easily spread when flames get into the kitchen’s ductwork and exhaust system, the vents, and fans that extract flammable vapors and smoke and are typically home to grease buildup.

We extend our heartfelt wishes to Qi Eng, her staff, and the entire Busselton comminity during this time and hope that the rehabilitation of this iconic Restaurant happens with minimal delay.

If you think your kitchen exhaust ventilation system does not meet current standards or represents a fire risk, you should contact an HVAC professional or kitchen exhaust ventilation company to do a fire risk assessment. The single most important thing you can do to keep your systems safe is to regularly inspect and keep the system clean. Make sure you are correctly insured and discuss with your cleaning contractor any safety hazards or compliance issues in your system.